On September 24th, 2013, WWE finally released a complete documentary set on one of the most influential, and certainly most powerful figures in the history of professional wrestling, the “son-in-law”, Triple H.

It’s hard not to respect Triple H.  Forget about the fact that he is a political powerhouse in World Wrestling Entertainment, just for a moment, and consider the career the man has had.  Beginning as not much more than an enhancement talent in World Championship Wrestling, to becoming, and continuing to be one of the most recognizable faces of this century.  This was a story begging to be told, and I’m sure the overwhelming demand for this DVD is what brought it to fruition (and, in my opinion, not a moment too late).

I’m a huge Triple H fan.  I’d be lying if I said I haven’t fantasized about walking down the aisle, in front of 80,000 people at WrestleMania, re-enacting his entrance.  It cannot be denied that he has one of the coolest, most timeless entrances of all time (maybe not as great as Hulk Hogan, The Rock, The Undertaker or Stone Cold Steve Austin, but miles ahead of Mick Foley, Bret Hart, or even Shawn Michaels).  His presence commands your attention, and 99 times out of 100, when you hear “It’s Time to Play the Game”, you know you’re about to get every penny’s worth of whatever you just spent on watching him compete (and if it’s a recent WWE PPV, whatever you’ve paid is astronomically too much).

So, with all of this hype going in, you would think that the Triple H DVD would be a sure-fire home run, right?  Well, you wouldn’t exactly be wrong.  It’s a home run, but it’s more like a blooper that gets under the wind and makes its way out of the park, more than a Edwin Encarnacion blast to the moon. 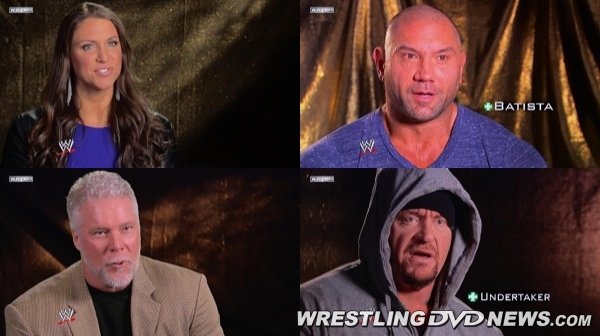 Some of the notable speakers during the documentary portion of Thy Kingdom Come – Photo Credit: WrestlingDVDNews.com

The documentary itself has a whole lot going for it.  Unlike the nWo: The Revolution or WWF Attitude Era DVDs, this gets the full documentary treatment, with the feature piece coming in at just shy of 2 hours and 10 minutes.  And there is plenty of star power in the talking heads segments, including Terry Taylor, Kevin Nash, X-Pac, Batista, The Undertaker, Shawn Michaels, Ric Flair, William Regal, Vince McMahon and a number of others (although there were a few notable exceptions, including Arn Anderson, that I wish they included), the most interesting of which being the Undertaker, completely out of character, which is a rarity these days.  The documentary, though, has difficulty telling a story of Triple H’s career, and rather seems more like a retrospective of things that he has accomplished over the years.  Where recent WWE documentary releases such as CM Punk and Mick Foley have brought the viewers along “for the ride” of the Superstar’s entire career, this one felt slightly less personal than that, even though the majority of Triple H’s career, including the early beginnings were covered.

Triple H himself spends the majority of the DVD narrating his career, which can become a bit dull at times.  His laid-back demeanor doesn’t give you the same sense of urgency as some of the previous releases did.  But there is a wealth of information here, including early interactions with both Eric Bischoff while in WCW, and Vince McMahon when making the fateful jump to the World Wrestling Federation.

Never shy of controversy, all of the major issues of Triple H’s career are covered, in detail, here as well.  That includes The Curtain Call, with the Clique, at Madison Square Garden, and subsequent punishment and TV burial, the beginnings of D-Generation-X, and the meeting, dating, and eventually marrying of the boss’ daughter, Stephanie McMahon.

This leads to what I found to be the most interesting part of the DVD.  Not a lot is publicly known about the “courting process” that Triple H, and Stephanie went through before eventually getting married, and having children.  Much has been said, through various sources, but not a lot directly from the horse’s mouth, so to speak.  It is within this piece that we learn of the difficulties Triple H had asking Vince McMahon for his daughter’s hand, as well as the political fallout in the locker room as the result of their relationship.  A great deal of insight is added by the Undertaker, who was widely regarded as the locker room Godfather, so to speak at the time.

The video and audio quality are, with rare exception, exceptional during the entire DVD.  There are times, during the documentary, that some of the Attitude Era footage doesn’t look as though it was cleaned up as well as some of the older clips, but it doesn’t take away from the overall experience of the feature.  All of the matches, including the old WCW footage, has gone through the process of being cleaned, and re-digitalized, and looks incredible considering the number of years that have gone by (and sometimes questionable storage methods the footage was kept in before falling into WWE hands).  Of course, as has been standard for the past several releases, all mentions of “WWF” and the scratch logo are left intact (enough cannot be said for how much that increases both the value and enjoyment of these releases). Not much in the way of rare WWF/WWE matches, though, as most have seen previous releases either in prior Triple H compilation sets, or in original form on the events they occurred on.

Coming in with such high expectations hurt my enjoyment of this DVD, however I did still thoroughly enjoy it.  Not much is missing from his career, as much of it has happened under the watchful eye of the ever growing WWE video library, which makes this feel like a complete retrospective piece on an amazing career.  The Blu-Ray version also includes several sit-down pieces which did not make the DVD release, and is worth the extra $5 premium as a result.  Everyone interviewed were, at some point, pivotal, or influential on Triple H’s career, so their additions add perspective to key moments throughout his career.

Overall, a strong 8 out of 10, and certainly worth the purchase price.  This is another strong release from World Wrestling Entertainment, which continues my faith in their gate-keeping of everything professional wrestling in the past 75 years, through their various videotape libraries.

Of course, if you’re interested in purchasing this, or any other WWE DVD product, you can do so, and support ChinLock.com, by visiting WWEShop.com!